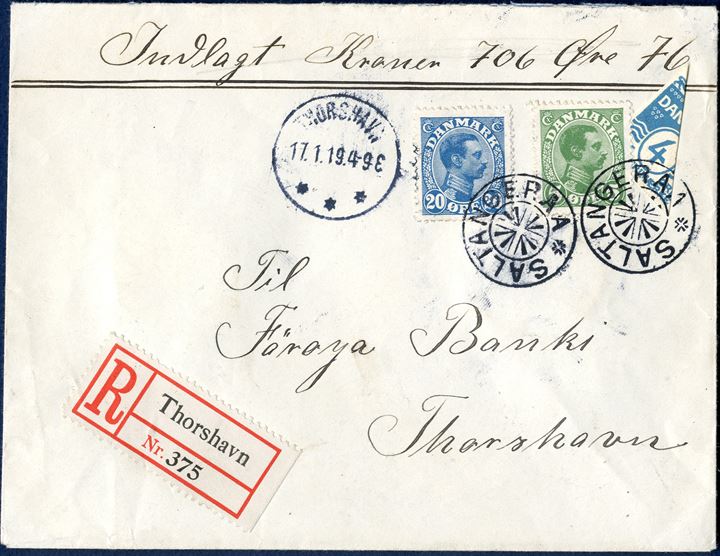 Bisected 4 øre wrapper cut-out on Kr. 706,76 value letter from Saltangeraa to Thorshavn, with Thorshavn reception 17 January 1919. Franked with additional 5 øre and 20 øre King Christian X cancelled with star cancel 'SALTANGERAA' and label of registration 'R THORSHAVN Nr. 375' affixed on front. 7 øre local rate plus 25 øre insurance fee, correct 27 øre rate, sender's address noted 'Afsender S. Simonsen, Saltangeraa' on reverse. The wrappers had no glue and in many places gum were not available and some inventive people tucked bisects under 5 øre stamps instead of improvising glue for the otherwise ungummed wrappers. See Hopballe 1919 book, page 10-11, postmaster Godsekesen Andersen in Thorshavn in a letter explains how some people solved the problem with the ungummed bisected 4 øre wrapper cut-out. Solmundefjord is knownfor having tucked bisects under the 5 øre stamps. Nine “tucked-under” bisect covers recorded, note also that all the stamps are in upright position, a fantastic letter in every respect.