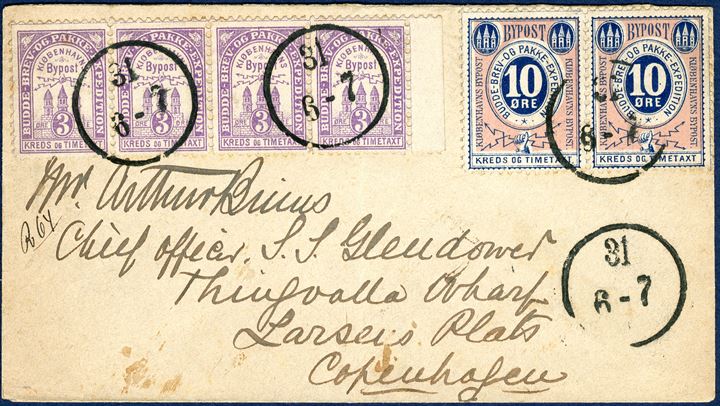 Copenhagen Bypost - letter franked with stamps of total postage of 32 øre, with 4-strip 3 øre and pair 10 øre large type 'Kreds og Timetaxt' to the chief officer of ”S.S. Glendonwer" at Thingvalla Wharf, Larsens Plads, Copenhagen. s.s. ”Glendower” arrived in Copenhagen on July 27 1884 and left again on August 3rd. Messengers could be hired for urgent messages, with registration number 'R64' manuscript, in this instance 32 øre was paid. Two letters exists to the same addressee with 32 øre franking. In Berlingske 135. Aargang, 4 August 1884, Nr. 179, S.S. ”Glendower" is found in the ship's list, arriving from Rangoon with a cargo of Rice. EXTREMELY RARE and in superb quality.